Some point shortly after crossing the Continental Divide I had thought the universe couldn't keep making ridiculous things happen. Then I met Rattlesnake Jim. Well, since taking a break in Jeff City, I haven't doubted the universe; I guess I just... forgot? Or was more excited about biking with Lisa than anything else. But since leaving St. Louis, I have been given free postage, offered a place to sleep in a barn, camped out in a torrential downpour, slept in a bathroom, met Gene, and... well, yes, there is still more to be told. Bicycle touring at its finest.

Before leaving us to our fish, Gene offered to bring us some breakfast, an offer which we graciously accepted. Remember, we only had 26 miles to go into Keokuk, so we had all the time in the world to close camp the next morning. Gene showed up about 8:00 and helped us get the fire going again. We decided to let it simmer down before cooking breakfast, so we headed out to help him feed the cows while we waited. 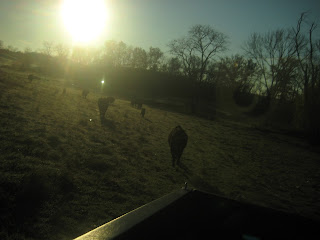 They chased us through the pasture for a bit before we got to the feed area. We helped Gene distribute grain before trying to pet some of the cows, but they were too shy for that. We didn't want to make them uncomfortable, so we headed back to the fire, and got a cookin'. 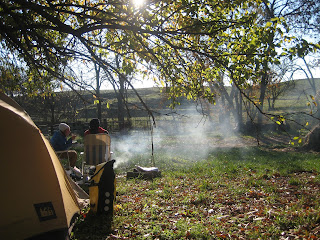 Mmm... camping in the midwest.

That's not a picture of our breakfast, but I decided you'd like it better than one. We had eggs, bacon, and toast. Thanks, Gene!

The rest of the day was pretty standard riding. We did encounter a lot of dogs, but none that wanted to bite us, so no harm done. Oh and remember, we had all day to do only 26 miles, so we took it super easy. 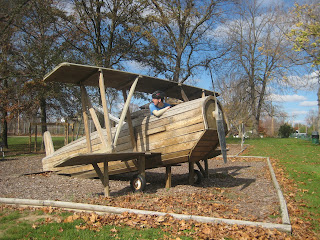 Flying a plane is super easy.

We also found the COOLEST PLAYGROUND EVER in Hamilton, IL. They had a wooden plane, train, truck, and tractor along with the regular playground. Okay, the playground wasn't terribly awesome (I have high standards about my playgrounds), but I was super excited to have found a giant wooden airplane. Those of you who can see all of my photos via Facebook... beware. 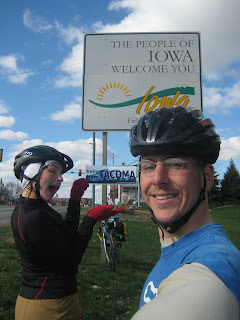 One of these things is not like the other.

...and met our hosts for the night, Stephanie, Bill, and their 2-year-old son, Grant. We had a grand old time. Dinner was salad and pizza, all from scratch; dessert was snicker-doodle and pumpkin butterscotch cookies, again from scratch. We took a walk around the neighborhood, which was really interesting. Keokuk was apparently one of the first cities to build a bridge across the Mississippi, so at one time it had the largest concentration of millionaires in the world. Since 1976, however, the population of Iowa has decreased every single year. This means you can buy a beautiful riverfront home in Keokuk for anywhere from $30,000-$100,000 (most of them need some $100,000s of work, however). It was ridiculous.  Bill and Stephanie knew a lot about the houses in the area and how they were built, so it was a swell tour. Back at their house, we watched a video of their bicycle tour of France, complete with castles and stunned Frenchmen ("Vous etes de la!?" -- "You're from where!?"). Anyways. 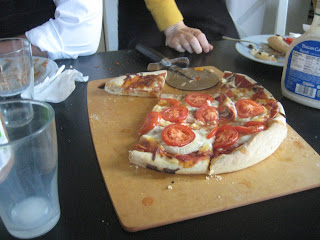 We took off the next morning hoping to make it halfway to Iowa City, where our next host was. This included a 10 mile ride along the Mississippi River, which we then departed, not to meet again until the last day of the entire tour. 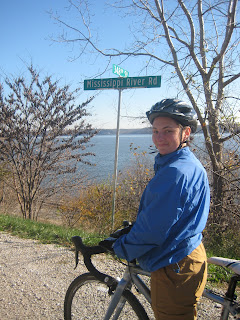 Lisa is pretty satisfied with herself right about now.

Iowa isn't exactly made for bike riding. Remember that we were off the ACA route and making up our own. We also didn't have a road map of Iowa since the tourist center in Keokuk was closed. So, we had to resort to Google maps. 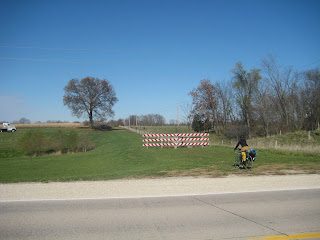 Don't ever use Google maps to tour Iowa.

We found ourselves on some gravel roads and even at one point (as pictured above) on a road that wasn't a road. It had been removed a few years ago (most of Google maps is dated 2007, I believe), but we only had 0.3 miles to do on it, so we did anyways. The other option was riding along a four lane divided highway with no margin, so... I keep trying to tell myself it wasn't too bad.

Also, to the left of the not-a-road was a cider mill, where we stopped for lunch and bought fresh bread and fudge. No complaints there.

Aside from the unconventional directions it was a pretty standard day. We made it to and left Mt. Pleasant, IA (the halfway point to Iowa City) about 5 PM, looking for a place to camp. 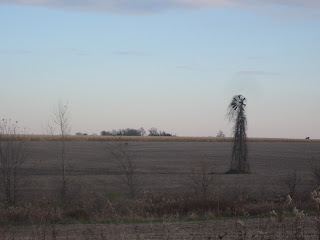 Not ten minutes out of town I looked back to see Lisa holding up traffic. There was an SUV next her with its window rolled down. A bit confused and a bit worried, I motioned to her to get out of the way so it could pass. We were in the Midwest, so it would be unusual for someone to cuss you out, but better safe than sorry. The driver waved as he passed me and pulled over just ahead. He got out, opened his trunk, and lo and behold...

So we had a place to sleep for the night. Mark gave us directions to his friend's farm, where he was headed for a party of sorts. This is the type of party where old men drink lots of beer and talk about nothing in particular for hours. It was swell. 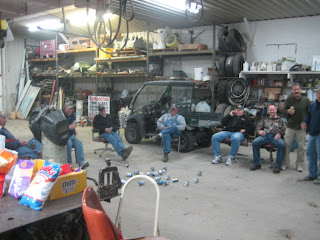 You can't make this stuff up.

They had a lot of food which they didn't eat, but offered to us instead, which we graciously took for the following day (wanting hot food for dinner that night, we cooked). I also got to try out Mark's (Iron Man's) bike, a special type of bicycle made for riding in "extreme conditions --" gravel, snow, etc. This model was made by Surly and called the Moonlander, and featured 4" wide tires at 4 psi. It rode like a semi with jacked up suspension. It was awesome.

We awoke the next morning to frost on the fly and got going early, around 8:30, with 60 miles to do and a constant headwind. Google maps kept us on gravel roads for about 25 miles. We were put on some roads with "Level B Maintenance," which I think means "we don't touch it unless a tree falls on it, and then we just leave a chainsaw nearby," but they were actually packed dirt and not gravel, so an easy ride. At one point we were told to turn on a road that dead-ended into a cow pasture, so had to ask for directions. This sort of thing continued until lunch. 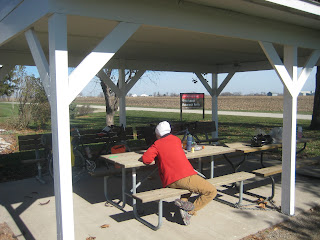 We happened to pass by some fields owned by Iowa State University, which was 200 miles away in Aimes, IA. But hey -- no complaints. They had a picnic area shielded from the wind and picnic tables in the sun. Just as we were getting ready to go, a gentleman in a picnic pulled up. He happened to have a state road map with him (THANK GOODNESS) so from there we dropped Google's directions and only had to do 3 miles of unpaved road for the rest of the day.

That unpaved road was quite the ride... but oh well. See, after lunch, the wind picked up to 10-16. Also, unpaved roads are ungraded, so they hit 20% grade easy... and also I have tires made primarily for riding on pavement. Lisa had no problem on her cross bike, however.

We made it into Iowa City around 8, and our hosts were happy to have us. They understood our needs exactly: "Sit. Eat."

Anne and Larry are fantastic. They own at least ten bikes between the two of them, bike to work every day, and have a huge garden. For dinner we had omelettes with all the ingredients either from their garden or bought locally; for dessert, homemade pie. They graciously offered to let us take a break day in their home, which was much needed after 61 miles into a headwind, 20 of which were on gravel roads, and three hours of which had the wind at 16 mph. So here we are... relaxing... updating blogs... reading... enjoying the Midwest. Oh, and did I mention we're only about a 7 day ride from Minneapolis?*

I'll just leave you with that. 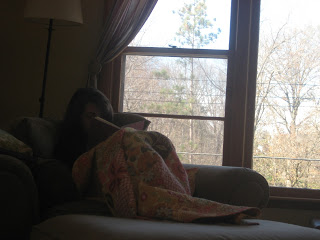 *We're about 300 miles from Minneapolis, which we could chug out in two or three days if we really wanted to. We encourage you not to underestimate the cold, the wind, or the hills, however. Also, Lisa is still getting into the swing of things. So we're going to take our time. Sort of. It is going to get super cold eventually. And possibly snow. Hm.
Posted by Kyle at 12:16 PM