Okay, so when we last left off, I had just stuffed myself to near-explosion status with Chinese food, and then I had biked 50 miles to Osawatomie, KS, 20 miles from the Kansas-Missouri border. Not the best combination ever, but hey, I wasn't about to turn down a buffet.

As I was coming into Ross's (my host's) house from the south, Tim came in from the north. The timing was uncanny. Actually, he had passed Ross's house, so we were a bit confused about where it was, but we did find it eventually. Ross and his parents were great hosts, and they even had air mattresses that didn't leak (those of you that have leaky air mattresses, well, you know who you are). So that night was a night of story sharing between Ross, his parents, Tim, and myself. It was a good night. The next morning we awoke to the smell of a most excellent breakfast: 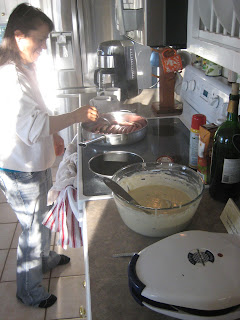 So let's see, that's sausage, eggs, yogurt with granola and strawberries, and waffles with homemade blackberry syrup. Yea... it was a good morning.

Right before heading out, Tim broke his sunglasses. Fortunately, Ross's mom had a spare pair of green aviators, so Tim became Tim the rock star. Unfortunately that photo didn't come out too well, but I'm sure you'll be able to pick him out in a future photo. In any case, we took off for Missouri. About mile 15 of that day, we passed a cider mill, and gratefully stopped for cider. Oh, and fresh donuts too. No big deal. 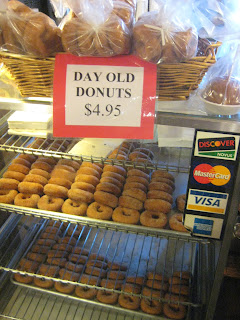 A LOT of donuts. Infinite donuts.

Okay, so it was actually pretty great. You could watch them make donuts through a window in the side of the room, and when they came out of the oven they'd put them on a metal tray, and carry the metal tray to the glass display in front of the register (yes, the same display in the photo), and from there they'd put them in a bag and give them to you. I hadn't had cider nor cider donuts in a while, and it was the perfect fall day for it, so this was really quite the treat. Tim had never had cider donuts before ever -- apparently it's not a thing in Germany -- and he wasn't terribly impressed, but he is always happy to expand his knowledge of American culture.

After enjoying half a dozen donuts each (at $0.50/piece, no less), we continued on our way. I admit I saw a sign that said "State Line 4" and thought maybe it was the fourth state line... like... if you label the sides of a four-sided state as you might the quadrants of an xy-plane in mathematics... but I decided if I was wrong about that it would be embarrassing  Sure enough, four miles later (*ahem*), 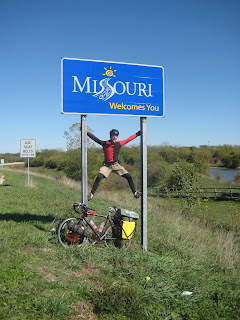 I think I'm setting too high a precedent for awesome state line photos.

Interestingly enough, as soon as we got into MO, the quality of the roads decreased almost instantly. They were still rideable, but once a mile or so there would be huge holes in the margin, forcing us into the middle of the road. Fortunately the roads weren't too busy. It was also quite windy that day, blowing 10-16 with gusts up to 20, from the south. This wasn't too bad, and was much better than having the wind coming from the north, as it meant we didn't get face-slapped by any passing semis. The road did turn south a few times, which was painful, but hey... win some, lose some.

After the cider mill, it was a pretty standard (albeit windy) day up to Harrisonville, MO. It was 40 miles into a 95 mile day, and about 3:00. We weren't feeling like we could crank out the other 55 by dark, but wanted to do so, as the next was to be a 100 mile day into Jefferson City (in retrospect, I don't know why we were pushing ourselves so hard -- perhaps for the promise of a place to stay, and a break day, in Jeff City). We were getting ready to go after lunch when someone came out and started talking to us. We told him about our trip and that we were planning on taking the Katy Trail when he said, "Oh! Well, I've got a cabin in Sedalia. Would you like to use it?"

Only if you've been on a bicycle tour do you expect this sort of thing. Anyways, he handed us the key, and off we went. We made it about 9:30, well into the dark of the night, but it was okay, because we had a place to stay. 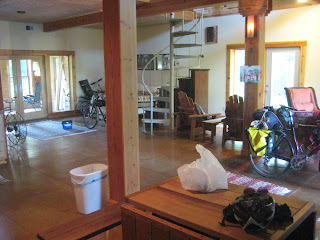 A pretty sweet place to stay.

It was a barn-turned-cabin, which was pretty cool. We were unable to figure out the hot water, so couldn't shower, but were grateful to have a safe, warm place to stay all the same. There was tons of bicycle art around, including a penny-farthing wine rack, a bicycle blanket... and more! Since we got in at 9:30 though, not much more story to tell. Oh, except we sort of thought he wanted to kill us in our sleep, so we slept upstairs with the bear spray close at hand.

Breakfast the next day was oatmeal and fruit, all of which we had with us (we did borrow some butter from the fridge -- thanks John!). Then we walked 10 yards to the Katy trail, turned left -- for all intents and purposes, our only turn for the day -- and began 100 miles of a fairly flat day.

(and thanks, John, for the cabin. And for not murdering us in our sleep) 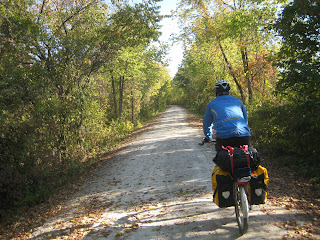 The first part of the trail was pretty hilly, unfortunately. Actually, it all felt uphill... not sure how that works. The scat trail obviously wasn't as smooth as we were used to, which may have had something to do with it. Anyways, we made good time, keeping an average of 12 or 13, I believe (note: while one might regularly go 12 or 13, the hillier places have him or her going 5-8 uphill, so he or she averages more like 9).

We stopped in Boonville for coffee and road maps, which we didn't have yet (coming into Sedalia we stayed on MO-2 the whole time, and we were only on the Katy Trail after that). The only coffee shop was a local bakery where there was also a Bridge tournament happening. Learning to play Bridge is on my to-do list, and I had checked off a lot of other to-dos on the trip, but this one was not to be, not on a 100 mile day. I accidentally made lunch of the place, we talked routes for Tim past Jeff City, and then we went on our way.

The second half of the day was much flatter, being that the Katy follows the Missouri river once east of Boonville. You aren't always right along the river, but within 100 yards or so. In any case, when there wasn't miles of farmland, it was quite scenic. We passed a few cliff faces with caves... caving, again, is on my to-do list, but that will have to wait for another time (side note: apparently the St. Louis area has one of the highest cave densities in the world. The caves are significant for their natural coolness and thus ability to store alcoholic beverages before the spread of the refrigerator. The longest walkable cave complex is 22,000 feet end-to-end, which was allegedly used as part of the Underground Railroad).

We reached the Jeff City outlet about 8:30 and headed into town, foolishly believing we were done with hills for the day. 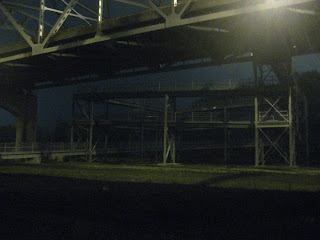 The ramp up to the bridge crossing actually wasn't that bad, as it was handicap-graded. I'm pretty sure we set a speed record on it simply because it was so nicely paved... but then we got to the city, which was hecka hilly. It was painful. But the end of the day was near! My sister has a friend in Jeff City named Ron, who was happy to host us. He even made noodle-hamburger galosh. Okay, I'm sure there's a better name for it, but it was improvised and delicious and filling and exactly what we needed, and that's the bit that matters. Thanks Ron!

Tim and I both took the next day off, and decided to cook dinner for Ron as a thank you for hosting. I wasn't about to let go of the German I had with me without making good use of him, so I -politely- requested (and didn't at all insist) that we have something German for dinner. We settled on schnitzel and potato salad and after a trip to the grocery store got to work. Tim was the head chef, working from memory, and I was the assistant chef, working at his beck and call. 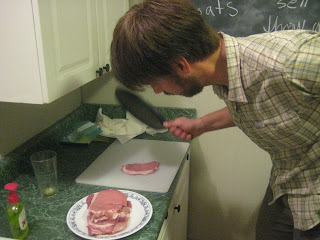 You know it's going to be good when you get to beat it with a pan.

I didn't mention this, but earlier that week Tim's wheel had practically fallen apart. I put my mechanic skills to use and trued it enough to make it to Jeff City. We found that Ron had a truing stand, so I was able to finish what I started. Once again, thanks Ron! Oh, he also gave us a tour of the capitol building, where he works, which was awesome. It's apparently one of the most artful capitol buildings in the country. We also got to see the chamber of the House, the whispering room (where you can stand anywhere and speak in a whisper and anyone else anywhere else in the room can hear you), and the view from the spire on the outside of the building. Yea... it was pretty swell.

The next day, Tim and I said our goodbyes, and he took off to finish his tour. My girlfriend, Lisa, was to arrive on Monday, October 22nd, in St. Louis, so I had a few days (read: 11) to kill. I'm not sure if I should be embarrassed or not, but I spent most of my time in Jeff City on the couch watching movies and How I Met Your Mother, one of my favorite TV shows. I mean, I had just biked 3600 miles, I needed to put on some weight... *ahem.* In my defense, my legs are still a bit sore as I type this. Obviously it wasn't long enough...?

During the stay, I got a package from my dad containing a jacket and a new tire (thanks, Dad!), cleaned house for Ron, and did some yard work for someone on Craigslist. Nothing worth more detail, I don't think -- bottom line, here I am, day 9 in Jeff City, getting ready to go again. I'll spend the weekend in St. Louis with a friend from college, then Lisa arrives on Monday... and I finally get to turn north! Minnesota, here I come!