Sister Jenna here, posting in Kyle's absence.  As he does not have frequent internet access, I will post quick updates when I get them.

Today, 8/30, Kyle is biking with 3 others through the redwood forest!  He has met a woman from WI (?) and men from Bosnia who are, at the moment, biking the same route as him.  He also met up with Bob for dinner tonight as he is on a motorcycle journey out that way - Bob tells us that Kyle looks great and seems to be having a great time with his new compadres!

Last night, 8/29, we got a text for Kyle saying that he was sleeping on a beach in northern CA!

We should (fingers crossed) have a real Kyle update tomorrow! 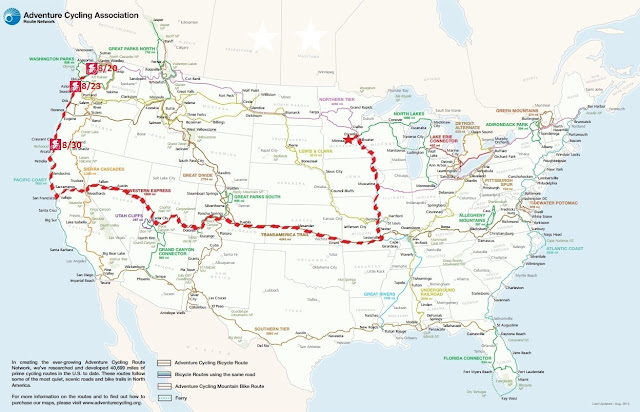 This week is my busy week, doing things that... well, things I haven't done yet. These things are all very important, however. For instance, how am I supposed to eat without a stove? I could eat cereal all the time... and I'm sure it's possible to survive only on dry food... but that's not really what I want to do. I like pasta, rice, beans, oatmeal, soup, and other things that require heat. So I spent a few hours this week making a zen stove out of a pop can.

The one pictured isn't mine, but it gets the idea across. These little gems are really neat. They work well, are cheap and fairly easy to build, and are practically indestructible. To use, all you have to do is pour alcohol into the middle, then light and wait. After a bit, the alcohol in the outer chamber gets hot enough to evaporate, escapes out the holes in the sides, and lights. Then you put your pot on and cook away!

I also practice-pitched my tent yesterday, and sealed the seams on the rain fly. I didn't feel like there was enough sealant, but managed to cover almost all of the seams. I had to leave a little bit of seam on the sides unsealed, but hopefully that won't be too much of a problem. If it is, I'm sure I can pick up some sealant during the trip, and use a non-rainy night to seal the fly.

I also ordered some stickers for my bicycle. His name is Jefferson, so one sticker says "Hello, my name is Jefferson." Then there are a few that say "This bike belongs to Kyle ###-####." I figure it's less likely to get stolen if it has my name and number all over it. I have a u-lock so I'm not too worried about someone walking away with it, but the more theft prevention measures, the better. Being heavy and covered in stuff could be a prevention measure or an incentive... we'll see. I read a cool article the other day about how to build an alarm for your bicycle. Essentially you tie one end of a string to your spoke and the other end to an alarm chassis on your frame. If someone tries to leave with your bike, the string will start the alarm and they'll be riding around on a very noisy bike. It's a cool idea, but I don't have the time to experiment with it right now.

Just a few other things to do and then on Monday I leave! I've been planning this for a while and it's finally coming to fruition... awesome.
Posted by Kyle at 8:49 AM No comments:

I have a bike!

His name is Jefferson. 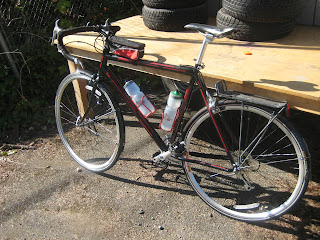 He sleeps in my room.

Time for a practice trip!
Posted by Kyle at 7:59 PM No comments:

For those of you wondering how all my time has been spent lately... this is how: 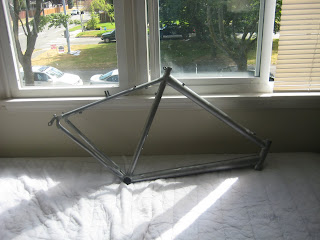 You can't really tell from the photo, but the only thing visible is bare steel. I've spent the past 7 hours of my free time sanding the thing down so I can re-paint it. First, because I don't want any rust on the frame when I take off. It probably wouldn't be devastating -- rarely do frames just fall apart -- but better safe than sorry. This frame is about 14 years old. It hasn't been used much, but there were some small patches of rust.

Also, regarding my comment in the last post about the wheels being great and everything else being crap... that's partly true, and partly not. The wheels do matter the most, along with the tires, and you have to have things that aren't going to break down after mile 1,000. Many bikes out there don't go that far in their lifetime. Most can take it, but you have to be careful not to use the cheapest parts ever. I've gotten away with snagging parts here and there from the shop and on sale, which (in my opinion) is the best way to do things. Anyways, I just have to paint the frame, and then I can slap her together.
Posted by Kyle at 11:29 AM No comments: