So, it's been a while since my last update, and yes, I've only (...?) made it to St. Louis. I do have a few updates and wanted to give them in order to stay on top of things, but long story short, I'm still waiting for Lisa. She gets in today! I am very excited.

So I think I may have mentioned this previously, but I know I didn't post a picture. One of the cool things about the Katy Trail (formerly known as the Missouri-Kansas Trail, or MKT, by the way) -- aside from the fact that it's, you know, 260 miles of fairly well maintained fairly flat bicycle trail -- is that there are stations. I doubt if they are all the same building that was there when the train was running in the 1970s, but either way, the idea is pretty cool. There's tons of facts and history about the trail and the city you're passing through, including places to visit (and eat!) and maps of the trail and the area. 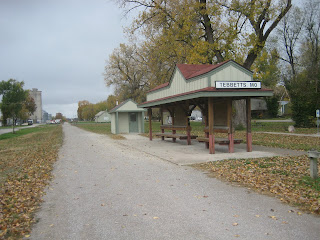 In case you missed it, this photo was taken from Tebbets, MO.

In any case, I left Jeff City nice and early, not wanted to bike in the dark that day, as I knew I had some highway riding to do towards the end. The Katy Trail greeted me with open arms, and all was back to normal. I mean, if you consider riding 50+ miles a day normal.

Admittedly, nothing terribly special happened that day. I did discover that Missouri doesn't have any no-smoking laws when I stopped at a bar for lunch. The chili they had was delicious though, even if it came with a slight smell of smoke in the background.

I made it to the MKT station at Dutzow, MO where my warmshowers host was to meet me that night. He had said he was going to "escort" me across the bridge. I wasn't quite sure what that mean, but I did know the bridge was busy and marginless, so I was okay with it. That was the original plan, anyways -- after telling me a few harrowing stories and really pushing the busyness and lack of margin of the road, I was convinced to let Jerry give me a ride. He also offered to give me a ride back to the trail the next day, so technically I would still be biking the whole way (the original plan was to get on MO-100 straight from his house, not to take the trail to St. Louis).

In any case, it was nice to have two hours off that I thought I was going to spend pedaling. Jerry and I spend the rest of the night talking about everything from gardening to woodworking to photography to boomerangs. Okay, admittedly, he did most of the talking -- roughly 98% of it. The company was nice, regardless. And oh yea, I can throw a boomerang now.

The next day I took off from the MKT Dutzow station about 9:30 AM, much earlier than I had anticipated as I only have 55 miles or so to do that day. I never object to getting an early start though. And also, it was a nice morning. 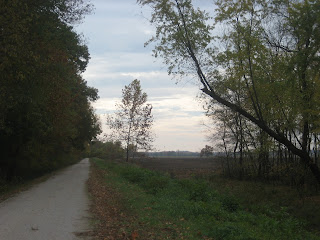 Lots of views were had that day.

Almost immediately after taking off, a fellow named Bob caught up to me. Bob was from St. Louis and was out on his weekend ride. We talked away about 15 miles (and this time it was closer to 50/50) and ended up trading contact information before he took off. He hadn't started in St. Louis, but in another city called *ahem* about 30 miles west. After seeing him off, I stopped for lunch at a bar just 50 feet away from the MKT station there. There were no smokers in this one, and the prices were good -- I paid $12 for a burger, two orders of fries, and a 9" pizza. Uhuh.

I don't know what magic happened that day, but after leaving the bar, there were a lot more people on the trail. I think it was a combination of the weekend, the weather, and the proximity to St. Louis. In any case, I had a few good conversations, and about 1 PM, 2 hours ahead of schedule, got to cross the Missouri River again. 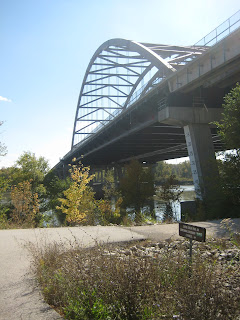 Only after going up the super awesome bicycle elevator to the top of the bridge.

Yea, that would have been cool.

It was a pleasant ride to Creve Coeur Park, which included a lake and a shared use path all the way around. It reminded me a little bit of my bike rides around Lake Harriet while home in Minneapolis... but I wouldn't be home for another two weeks. In any case, I stopped and had lunch on the beach, and then continued to weave my way through the St. Louis suburbs before finally getting to my destination for the day: 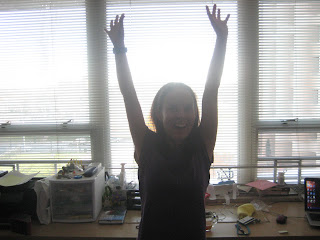 (not Lisa) -- okay, Rachel herself was not the destination, but her dorm room was. Rachel is a friend from college who is currently enrolled as a graduate student in the OT program at Wash U. She graduated from UPS a year before me, so we hadn't seen each other in quite a while and were happy to be reunited. I spent two nights there, so we also had ample opportunity to check out the dining in St. Louis's Central West End. This included a restaurant called "Pi," (yes, like the ratio of a circle's diameter to it's circumference), one called "Crepes, Etc.," for dessert, and a fancy-ish sushi place that we accidentally went to during happy hour, meaning anything on the Happy Hour menu was half off. Score.

Today (Sunday, 10/22) I left Rachel's to bike to a hotel in Maryland Heights. Lisa's flight just landed, and she's on her way! So we'll spend the night building her bike (she had it shipped to the hotel), splitting our stuff weight-wise, and watching a movie. We were originally going to head into Illinois tomorrow, but we've decided instead to visit the Arch and the City Museum, so we'll be heading back to Rachel's tomorrow. I'll update from Illinois in three or four days. 'Till then -- go watch the debate!
Posted by Kyle at 2:55 PM