Great Bend, KS to Osawatomie, KS: Warmshowers all the Way

So this will be a good post. During this part of the trip, I met a lot of interesting and exciting people. Kansas got a lot more interesting (no offense to those I'd met already!), and to top it off, I have some extras for you. I'll start with one of those, actually.

In an earlier post I mentioned that I had met Rattlesnake Jim, who, in his spare time, milked rattlesnakes and sold the venom to the government. I was skeptical about how the venom got turned into antivenom, but I recently read about the procedure, and it's pretty cool, so I'd like to share.

After being milked from the snake, the venom is diluted and injected into horses, goats, or sheep. The immune systems of these animals are able to produce the necessary antibodies to keep them from harm. After the antibodies have accumulated, blood is extracted (which now contains the antibodies) and centrifuged to separate the red blood cells from the antibodies. The antibody solution is then purified into a powder (for oral consumption) or bottled (for injection). Notably, the animal antibodies may (and often do) induce an allergic reaction in the patient, but this is better than death or crippling.

So there's your fun fact for the day. Back to my tour...

I had just spend the night beside a church in Great Bend, KS. I slept pretty well despite being in the outskirts of a city, perhaps because there was a huge brick building on one side of the tent and a fence on the other. In any case, I was woken up at about 7:15 by the garbage truck, and took it as a sign that I might have overstayed my welcome. The citizens of the nearby suburb would no doubt be heading off to work soon, and I didn't want to freak anybody out.

The good thing about big cities is this: 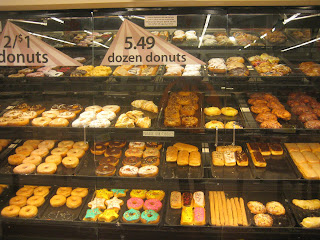 Okay, there are a few other good things, like... things... that are good... honestly, when biking, big cities aren't exactly on your to-do list. But it was nice to have donuts for breakfast. Cheap donuts -- $0.50/piece is the cheapest I've found them so far. Usually they are $1.00 or a bit more.

I also saw something interesting during my morning of city life: 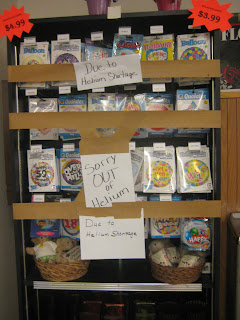 Well, glad it wasn't my birthday.

I had known about the helium shortage and it's impending doom for a while now, but didn't know when the crap was going to hit the fan. See, due to the 1996 Act, or the Helium Privatization Act, the US Government is required to privatize (sell to corporations) all of its helium reserves by 2015. That's really the only reason filling up a balloon is (and still is, despite rising prices) so cheap. I read somewhere that without certain regulations encouraged by the 1996 Act, it would cost about $45 to fill up a standard size birthday balloon (about 4.3 US gallons) with helium.

The short of it is that in the 1960s, the US Government was like "Dude, we can use this stuff to win the cold war!" So they bought a bunch of it. And then after the cold war they were like, "Dude, we're broke!" so they decided to privatize it. So then some corporation was like, "Dude, let's get rich!" so they lobbied like crazy and got the 1996 Act in place. So now we're going to run out of helium. Which isn't just used for birthday balloons, but also in MRI scanners, telescopes, and arc welders. So if you need an MRI, get 'er dun.

In my research for this tidbit I also came across California's Balloon Law, which I thought was interesting. It has to do with selling balloons such that they don't cause power outages by snagging on power lines. But you can read up that one on your down.

Tequila is also in a similar situation, but that would be way off topic. All I'm sayin' is a basement full of the stuff might be a good investment.

That day was, by far, the windiest day of my trip. Remember how western Kansas looked all the same? Here's what that entire day looked like:

But seriously. It blew. And it blew. And it blew. Winds were 10-16 with gusts up to 24. And it blew from the northeast, which wasn't the worst direction it could have blown from, but it was about the 2nd worst. See, it wasn't a headwind (which would have been from the east), but it did blow from ahead and across the road, so every time a semi passed me I got thrown about a little bit. Semis coming head-on slapped me in the face with their drafts, often slowing me down by 3 mph or more. Semis coming from behind slapped me from behind and did often give me a noticeable push, but because they blocked the wind, it was tricky not to suddenly be steering into the middle of the road. In any case... it was a rough day.

I called my warmshowers host around 1 to say I had 50 more miles to go. He said, "Great! So you'll be here around 5:30 or so" (dinner was at 6)! I laughed, telling him the wind was pretty bad. I got in at 8:30. Dinner was great. And as with many other hosts, Charles had great taste in art: 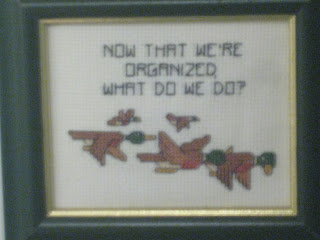 In case you don't know, I have a thing for ducks.

I was graciously invited to take a break day at Charles's house, but had already setup warmshowers for the rest of Kansas, and wanted to make it to MO so I could take an extensive break, instead of many short ones. I did allow him and his wife (and his dad) to have me for breakfast the next morning, which was delightful. It's always nice to have a homemade breakfast -- often when camping, "breakfast" means "bread with peanut butter." But that day I had eggs, toast, bacon, hash browns, coffee, and juice. Delicious! Thanks again to my host for both the good food and the good company.

I had set up a pretty easy day for myself that day, as I knew I'd be worn out from the wind. I biked about 60 miles, 20 with a light (2-6 mph) headwind. I also spent the windy part of the day in the Flint Hills, which are the hilliest part of Kansas (and nothing compared to the Rockies), so I hardly noticed the wind. For the record, I actually like rolling hills. Even if you can't always keep your momentum, you almost always feel like you're making progress. I mean, to see this ahead of you -- 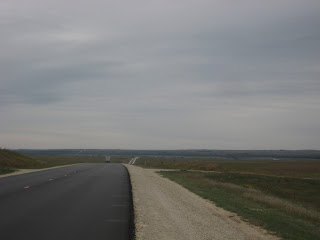 -- and then to look up again in half an hour or an hour, and see something completely different... it just makes me feel accomplished, I guess.

In any case, I spent the night in Council Grove, KS, a gem of a town smack dab in the middle of the Flint Hills, complete with trees, lakes, and historical markers admitting that we pretty much screwed over the Indians that were there before us. My hosts for the night were, again, most gracious, and we had a nice chat about sewing machines and quilting. I even acquired some fabric with bicycles on it, with which I will complete my first quilting project, a pillow, upon arriving home. I'm pretty excited. And yea, you do acquire a lot of things while on tour... fortunately, anything not immediately necessary I have been able to mail home.

So once again I enjoyed a warm shower, a warm bed, and (always the best) warm company. The next day I took off for an 85 miles day with the wind at my back. My host had said, "This is one of those days we don't want people to know about;" indeed, it was the perfect day. 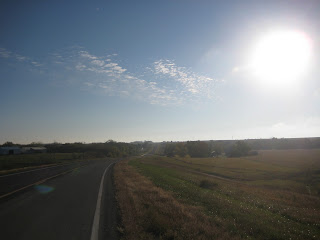 The hills are alive with the sound of AWESOME.

Nothing really to report on that day, except for the $6.25 Chinese buffet I found with the hilarious waitress. If you don't recall, I was off route at the time, and when you're off route people don't really know what to make of you.

"You ride motorcycle, yes? That's why you have helmet?"

"A bicycle! That's why you so skinny!"

And, whenever you leave anywhere,

Okay, most people you meet have perfect- or near-perfect English, but you get the point. Did I mention the $6.25 buffet? 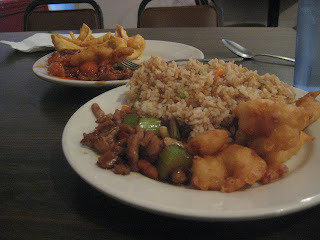 Needless to say, I made it to where I was going that night.
Posted by Kyle at 12:15 PM