Greetings devoted followers! I apologize for the delay between this and the last post -- a lot has happened, as always. For starters: Yes, the title of this post speaks true, I am home! Apparently some people have been worried that I might have died. Not the case.

So, that means this blog is quickly winding down. There will be two more posts, this being the first. It will focus on the last few days of the trip. The second post will be an overview and have a small "What's Next?" -- because you can't just stop at biking the country. Be sure to tune in a few days from now for the final post! And until then, on to business... 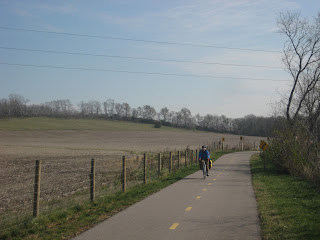 The business of pedaling!

We left Iowa City at 8:30 with an encouraging text from Anne (our host) ("Get your asses out of bed and in the saddle!"). Aside from passing an old-fashioned Diary Queen (see FB) and a car wash called "Rubber Ducky Car Wash" (complete with smiling rubber duck logo), it was a pretty standard day. Heck, it wasn't even that cold.

Thanks to Anne, we have a route picked out for the next day and a half. There was a bike trail from Ely, IA to Waterloo, IA. The trail would turn out to have some hiccups, but nothing major.

Before we went into the maze of bicycle trail throughout Cedar City, we smelled... delicious. 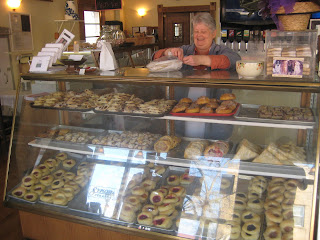 An intentional wrong turn led us to a Czech Village with a Czech bakery. It was the most delicious choice we made ever. Okay, maybe not ever... but having lunch at a bakery is definitely on my do-more list.

We continued on to make it about 20 miles outside Waterloo before stopping for dinner at Joensy's Tenderloins in Center Point, IA. It was one of the three places to eat in town, next to a pizza place and a gourmet snack shop -- eg, Joensy's was the cheapest and the least greasiest. 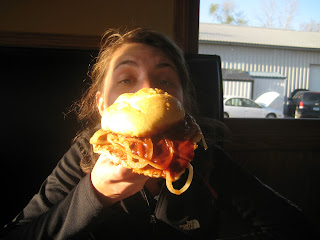 And unbeknownst to us, also the hugest.

After letting our stomachs settle we decided to head out and look for the first place to stealth camp we could find. Despite having just taken a break day, we were exhausted... somehow. So we found a place. And crashed. At 7. 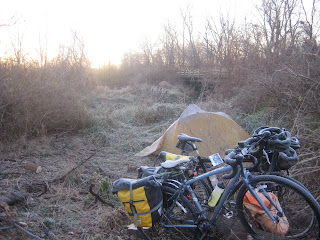 And woke up and were cold.

We woke up and thought about getting going... and then decided it was too cold. We didn't get going until 9, at which point all our stuff was still frosted (see photos on facebook). We had to stop frequently to rub our toes, change into warmer and/or colder clothing, etc. etc. It was all rather annoying, and not something we really wanted to repeat. But really.

We had set ourselves up to stealth camp for four out of the next six nights... and weren't really looking forward to it. We weren't meeting a heck of a lot of people (since, at that time of year, most of our meeting happened via Warmshowers), and oh yea... did I mention it was cold?

When I first left Tacoma, the point of the ride was to get to Minnesota. Sort of. I wasn't really sure what the point was, but I decided that a significant part of it was to have fun, and to meet people. We weren't meeting a lot of people, and it was so cold that it wasn't fun -- at least between the hours of 4 PM and 11 AM. So we decided not to continue.

Somehow my Grandma was able to come get us that same day. We were expecting to have a day to change our minds, but alas -- quick-acting Grandmas. In any case, we were glad to be warm. We spent a few days with Arlene (my Grandma) and Caleb (my first cousin) before my sister came to pick us up and take us home to Minneapolis. 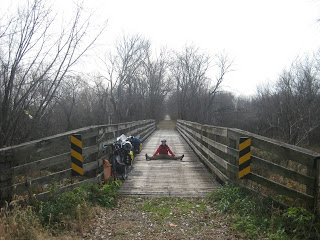 So... thus ends the story of my bicycle trip across the country. I have a lot more to say... which I will say in my last post. Check again in a few days. For now, I'm being called to cook dinner and watch the election! My dog is here, my mom, sister, and best friend are all here... oh, and did I mention -- it's warm indoors?
Posted by Kyle at 4:20 PM